Today I repaired my TV. I have had the unfortunate events that the two TVs in the House died within a month of each other.

Now I should mention that I do not have experience repairing TVs, but I have assembled computers in the past and have pulled apart my fair share of electronic devices as a kid. I also have an electrical engineering degree which I haven’t used in over 20 years.

It started a few weeks ago when the TV died. The TV is an old Sony Bravia 32 inch. It started having the standby light blink twice. A quick search on the internet revealed a power supply issue. So the next day when the sun was up so I could get good light, I took the back off the thing and looked at the power supply board. I have heard before that a common problem with LCD TVs is that the capacitors blow. Not in this case, they all looked fine. The problem was elsewhere. I decided to replace the board for the power supply. A quick search online and I found one for $83 in China. Before I went out and bought the board, I thought I should check repair costs. The next day which was Monday, called up a few places, the cheapest was $66 just to look at the thing. Not repair. So I decided to try the repair myself. I had nothing to loose. A replacement TV would cost only $200 if it was beyond repair. My work colleagues told me that I was wasting my time, just get a new TV, it will be better, but I thought of this as a learning experience. If I can repair the TV, I learned something. So I bought the part and waited the two weeks for it to arrive.

Well, it arrived this week and today is the day that I put it in.

First things first, I took the back off. There are quite a number of screws on this thing.

Then I took the power board out. There are only 6 screws and 3 ribbon cables that attach to it.

I then pulled the board out gently, then put in the new board and started putting the thing together. The whole process took about 20 min at most.

Then came the test. The TV worked!

So what has this got to do with agile? Well, a lot of companies have the “install” mindset. They purchase a big “solution”, have the vendor or a consulting company like Wipro, Capgemini or Accenture do the implementation and after a lot of pain and customization have a new thing to play with. The problem with this approach is that the new product gets thrown over the fence to the internal team to maintain. If the team is lucky, they were involved in the implementation, but this is not always the case. If they are involved, its usually at a limited capacity. What ends up happening is that the team although made up of competent people have no idea how this complex system works and they end up  just doing what they know. Sometimes all they know is how to restart the system. 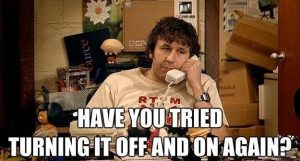 If anything goes really wrong, it’s a call to the vendor who then has to come out and fix the issue.

This is usually not free and can cost quite a bit, if you do not have a service contract.

The thing is that you have reduced your competent people to incompetent people because you have denied them experience. You have denied them an opportunity to learn. Companies with the install mindset see the work as the goal. The work needs to get done, so get the outside people who know the work to do it. This is fair enough, but you need your own people deeply involved to get the knowledge. Not a one hour handover at the end of the project. This is just asking for trouble in the long term.

A better mindset is to have a “learning” mindset. You can still have the vendors and implementation specialists start the work, but you need to get your own people heavily involved. Get knowledge transferred from the implementation specialists to your people. It may be a bit slow at first, your people are learning, but you eventually have people just as competent as the installers. If not more as they also know your business and environment.

I have read that Toyota tries to implement and repair their own systems themselves. It means that their people can repair the equipment quickly, it’s part of the operators job. They know how t repair it because the were the ones who implemented it. They were given the knowledge. It means less downtime, more self reliance and actually lower cost.

So let your people have a safe area where they can pull things apart and learn. Just like I did with my TV. It will help them and your company become more self reliant.

Oh, as for the other TV, I ended up buying a bigger TV to replace it, but I pulled the back off today as well to see what went wrong. It seems to be a capacitor issue. Two capacitors have blown. When I get the chance, I’ll be heading off to Jaycar, an electronics supplier here in Melbourne for a couple of capacitors to replace the blown ones. Wish me luck on seeing how I get this one fixed. I’ll update on the result.