Recently in Australia, we have just had the results of a Royal Commission into the Banking sector with damming results.

For those that don’t know, a Royal Commission is an significant investigation carried out by the government. This one found abhorrent behaviour by the banks in order to make a buck. The thing is, that this was across the board. All major banks in Australia were involved.

Although no one went to gaol, (jail for those americans) at least one CEO had to resign.

So, what happened? Well, to put it simply, the bad behaviour became normalized. It got so bad, that the government had to step in.

I’ve just finished reading a book by Sidney Dekker, The Field Guide to Human Error, and I’ve listened to a couple of talks where he mentions the Normalisation of Deviance.

This is where there may be a slight deviation from normal behaviour. Deviation is normal, we have to adapt to changing conditions, the problem comes when that deviation is towards something not right. This is what happened with the Banking sector. A long time ago, being a banker was a respectable job. Being a bank manager was a position of prestige and respect. Then, something changed. My thoughts are that this happened in the 80s, but that is my own opinion. That change was to make significantly more money for the bank – or for ones own gain, through not so ethical means. That unethical act, though small was accepted. It could have been a sign of the times, who knows. But it was accepted.

Other people seeing the benefits decided to do the same thing. At that point, that act was now “normal” behaviour.

Since that act is ok, why not another act, then another, then another. Slowly, over time, behaviour that previously was unacceptable became acceptable, even encouraged till – POW! A line is crossed and things are really really bad. 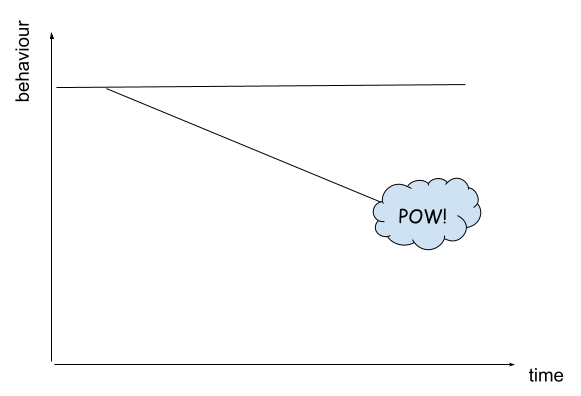 This analogy of normalisation of deviation works for acceptance of errors.

Lets say like what happens in a number of projects, no Sev1 or Sev2 errors are allowed, but we allow 3 Sev 3 errors to get the project into production as quick as possible. Then the next project comes along. Well, things went well with 3 Sev 3 errors last time, why not 6. Then the next one after that, 12. These cause problems for the operations team, but they can fix the problems on a daily basis (the symptoms – not the underlying error). Project after project adds more issues. Sounds a bit silly, but this happens everywhere that errors are accepted. Not immediately, but slowly over time. Years or decades. Sometimes the problems get fixed – sometimes you live with them until the problems become more trouble than what they are worth then you have a little pow! Where you create a project to fix some of these problems. Maybe through a re-write. Maybe a replacement of technology. If things are really bad – then you have a major outage with significant down time. On the other hand, you may never see these issues – or you think you may never see any issues.

The thing is – when you are in the bubble, where behaviour is acceptable, you do not see the POW come until it is too late. That is if it does come. Why, because the precursors for the problem are through normal work. Normal acceptable behaviour that everyone in the bubble does.

So what is the solution? In my opinion, it is to have a goal of what is acceptable behaviour, what is an acceptable condition. A condition or behaviour that is so excellent, so noble, that it is unattainable, and if it is attained, then make it higher. Accept that deviation will occur, but don’t normalize it unless it brings you closer to that higher plane. Systems degrade because things change, entropy enters the system, because of those changes and we as humans have to change with it. What that higher goal gives us is a direction. A direction beyond our on self interest. A goal to strive for. That is how I see we can veer away from trouble.

With the banks, the goal was to make money. Excellence was secondary if thought of at all. Yes they were successful, some even got away with it. They made money, but at what price? Reputation, possible gaol time? Respect? Was it worth it? It seemed like it was right up until the end.
They never saw it coming.

Agile is a tool that can help with keeping you towards a goal – if done properly. With an ideal goal at hand, Agile helps as you pause every sprint – see how you are going towards your goal state then adjust towards that goal. Sometimes you veer away, but if you look – you can see it and make and adjustment. On the other hand, if you do Agile without a goal state in mind, then compromises are made. Those compromises then become normal, and then more compromises are made again and again then no amount of following Agile practices will help you. Things may seem good at first, they may even seem good for a while, but the question is – are they really? How do you know when you are in the bubble? Even if you have a goal, how do you know it is the right goal?

The thing is you don’t – you have to be continuously vigilant. You have to keep striving to be better – to do what is right.